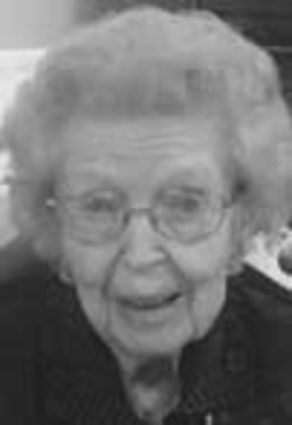 Jean Loraine (Corliss) Jacobitz, 101, the daughter of Martin and Gladys (Harter) Corliss, was born Sept. 24, 1918 on the family farm near Hebron. She died last Tuesday at the Thayer County hospital.

She was a member of the Christian Church in Hebron and the CWF.

She rode her horse or bicycle to attend country school District 23, southeast of Hebron. She graduated from Hebron High School with the Class of 1936. She continued her education attending beauty school in Beatrice and operated a beauty salon in Superior.

Jean married Corporal Lyle Jacobitz on June 12, 1943 at the 357th Infantry Chapel in Camp Barkeley, Texas. This union was blessed with the birth of four children.

Jean attended many Corliss family reunions throughout the United States.

She was a charter member of The Avalon Extension Club, and also a member of VFW Auxiliaries 3528 and 3113.

She lived on the family farm southeast of Hebron where she enjoyed her flowers, gardening, canning and her chickens especially delivering fresh farm eggs to numerous people.

Her funeral was held Friday at the First Community Church in Hebron. Officiant was Pastor Steve Speichinger.