State playoff games are set up and directed by the Nebraska School Activities Association. For the 2020-2021 season, L-N was assigned to District D2-7 and was played at Franklin High School.

L-N won both games to claim the sub-district championship, starting with No. 2 seed W-H in a close game and needing a strong fourth period to

claim the win. The championship game against the No. 1 seed Franklin needed

an overtime effort to win.

The D-2-2 District game will be Friday, Feb. 26 at the Diller-Odell High School. L-N is the No. 15 seed in all the district tournaments and will play No. 2 seed Falls City Sacred Heart who comes in with a record of 23-2.

The game summery of the L-N game with Wilcox-Hildreth (W/H):

L-N – WILCOX-HILDRETH: 39-36: Almost all games in a season have their own identity and this game against the No. 2 seed in the sub-district was no different.

However, that identity can change as a game progresses. The beginning of this game left a few fans wondering just how it was going to end as W-H took five field goal attempts and two free throws attempts before the Raider even took a shot. W-H early rebounding seemed to shut L-N out. However, L-N did have a 32-30 edge in rebounds for the game, so that impression didn't pan out. And, yes, W-H did have a lot of field goal attempts early, but L-N actually had more for the game, 51-41 and L-N made a higher percentage of those shots: 31 percent to 29 percent.

The complexion of the game changed a number of times. Emma Epley got L-N on the score board with a 3-pt. shot after the Raiders gave up two fouls, two turnovers and one missed field goal attempt. Scoring by either team was sparse and the period ended 7-6.

In the first four minutes of the second period, W-H had only one turnover and hit 4-5 field goals for a 10-2 scoring run. However, in the last half of the period, L-N was turnover free and went on a 7-1 scoring run to tie the score at 16-16.

Quarter No. 3: W-H had another scoring run during the first five or six

Quarter No. 4: For three of four minutes W-H kept their lead alive until

field goal to give L-N the lead at 37-36 which they never lost. Free throws by Katelyn Mazour and Emma Epley kept the Raiders safe and L-N can record a sub-district victory for the 2020-2021 season.

a season high 17 points to go along with 5 rebounds, two assists and three steals (her four made 3-pt. shots was also a season high). Emily Miller recorded another 'double-double' for the season as she had 10 points and 10 rebounds.

L-N – FRANKLIN: 32-30 OT: The championship game of the D2-7 sub-district playoff game came down to the Lady Raiders facing Franklin (the No.1 seed of the tournament), a team L-N lost to in the 3rd game of the season. The overtime victory was as interesting as the score might indicate.

The two point victory might just be attributed to free throws. L-N had 6-11 and Franklin had 4-13. That's two points right there. However, maybe the Raider edge in rebounding (34-27) accounted for those two points as well. Then . . . maybe because L-N gave up only 18 turnovers while forcing 25 from Franklin was the reason.

I would suggest all the above and other reasons for the reason for the win. The girls played a 'solid' game and they will have to repeat, or better, the performance next week in the district tournament game of the playoffs. The game summary:

Quarter No. 1: L-N scored first and led the whole period with several highlights. One was the Raider rebounding that helped keep the ball out of the hands of the Franklin players. And, when Franklin did have the ball, the Raider defense forced six turnover. The highlight of the period may have been a blocked shot by Emily Miller who took the ball the length of the floor to score on a lay-up. Score: 9-7.

Quarter No. 2: A steal by Emma Epley and another blocked shot by Emily M. resulted in four points as each drove the floor and scored on lay-ups. L-N was building a lead that disappeared in a quick 40 seconds at the

end of the period when Franklin scored six points to almost tie the game. Half time score: 17-16.

Quarter No. 3: Franklin grabbed a short lived lead early in this period, but the teams traded points with L-N making 4-6 free throws to keep their edge. Quarter score: 25-22. 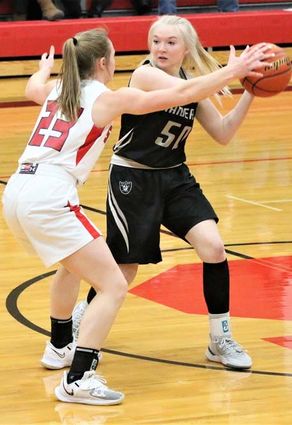 Tori Miller doesn't seem to appreciate the look this Superior defender is giving her in action from the game with Superior. Tori is usually one of the first player off the bench in many game this season.

Quarter No. 4: Franklin tied the game at 29-29 with 3:03 left in the period. Both teams went scoreless for those last three minutes forcing the game into overtime.

O T: Both teams were careful in handling the ball, but with 2:43 left, Emma Epley cut across the free throw lane and a team mate hit her with a pass enabling her to score giving L-N a 31-29 lead. Each team hit a single free throw in the remaining time, but no other scoring happened. Final: 32-30.

Emily Miller had a good game, scoring 21 points, pulling down 15 rebounds and had six steals.