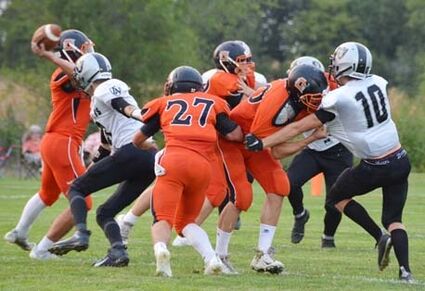 It isn't always possible to get the entire senior class out for football in one action picture. Above, seniors Wyatt Brockman 9 (left) and Jacob Swift are part of the Raider defensive effort to stop the Diller-Odell quarterback passing attempt.

It started as just another warm, late summer game of football, involving a trip to Diller, Neb., to play the 0-2 Diller-Odell (D-O) Griffins. It ended up almost like two games. The first half one in which the Raiders played just to survive. The second half, one in which L-N scored with every possession of the ball using a good running game to grind out the 46-26 victory. It gave L-N a 2-1 record in this young season.

After victory margins of one or two points in the first two games, this 20 point margin did not eliminate excitement throughout the game. Consider the score by quarters.