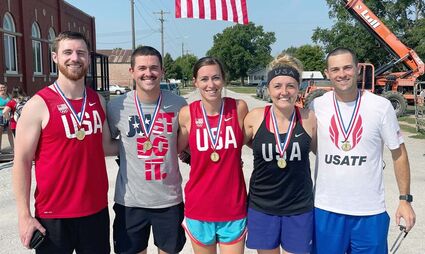 Saturday was forecasted to be a warm one, with highs reaching 95º, but that didn't stop 30+ runners from attending the Backroads Relay hosted by the Lawrence and Nelson community clubs. Seven teams consisting of five or six runners gathered at the American Legion in Nelson in the early morning hours to begin the relay. The course is around 20 miles with six checkpoints. Each runner ran about a three mile leg before another teammate took over.

The finish line was under a large American flag on the Main Street of Lawrence. Several vendors were set up for the Backroad Relay Vendor Show...