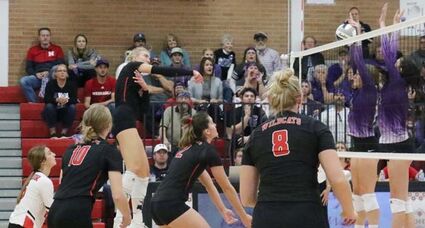 Ella Gardner (10) waits as Shayla Meyer (12) goes airborne while Superior teammate. Cailyn Barry (2) and Brooklynn Grabast (8) await the return of the ball from Burwell players during Saturdayʼs district final game at Superior. The Wildcats won to advance to the state tournament.

The Superior High School volleyball team has qualified for the state tournament for the fifth consecutive year. Though Superior lost its sub-district final match to Sutton in five sets, they were highly ranked in the wildcard point standings. This enabled them to advance to the district C 2-3 final as the number three seed. They were paired with the number 14 seed Burwell. They dispatched Burwell in three sets, 25-13, 15-16 and 25-23, to advance to the state tournament in Lincoln beginning today (Thursday).