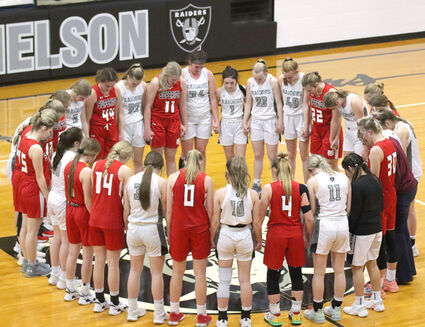 Members of the Lawrence-Nelson girls basketball team form a student initiated prayer circle after each game.

It was the final game of the regular season for both the Superior High School Wildcats and the Lawrence-Nelson Raiders girls basketball teams when they met at Nelson, Friday.

Superior came away with a 51-35 win and county bragging rights.

Lawrence-Nelson fell, 57-34, to the Diller-Odell Griffins, at Odell, Thursday, in a game that was never close.

The Wildcats jumped out to a 23-15 lead after two quarters. Try as they might, the Raiders were unable to close the gap as time wound down.

Shayla Meyer led the Superior offense with 23 points against Lawrence-Nelson. She collected 20 reboun...