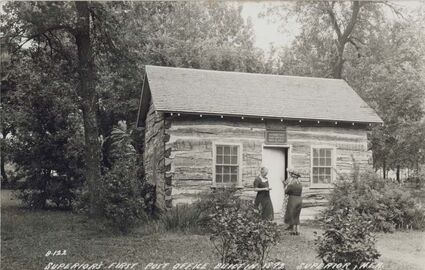 Janice Stratman mailed The Express this photo of Superiorʼs first post office and asked that we pass it on to the Nuckolls County Museum. Before doing so, we decided to share it with our readers. The picture post card doesnʼt indicate the year of the photo or the names of the women pictured in front of the building but judging from the size of the trees, the sign above the door and the way the card was printed, we suspect it may date to 1950 and the Superior Diamond Jubilee. The log cabin is now located near the museum in City Park.

This year marks the 150th anniversary of the building of the log cabin which became Superior's first post office. It was built by William Louden, the founder of Superior.

The cabin was first located on the lower lands southwest of the former Mid-America Dairymen plant. There it served not only as the post office but also as an early store and residence. Tiny houses are not new. At one time it was divided and two families called the small structure home.

The building has been moved at least twice. The first move took it to Lincoln Park where it served as a storage building for Superior Cha...