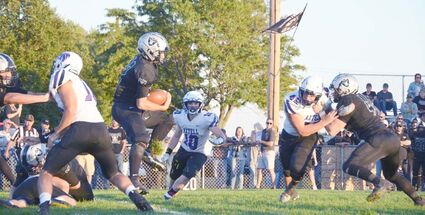 Toby Kotinek (42) carries the ball for Lawrence-Nelson as Rocky Miller (44) sets up a block on the far right.

The Lawrence-Nelson High School football team keeps on rolling as they picked up win number four of the season as they declawed the Axtell Wildcats 52-22 at Lawrence, Friday. The win extended the Raiders winning streak to three games.

Krayton Kucera aired it out with 23 completions for his 31 passing attempts. He was good for 298 yards, a touchdown pass and four two-point conversion passes.