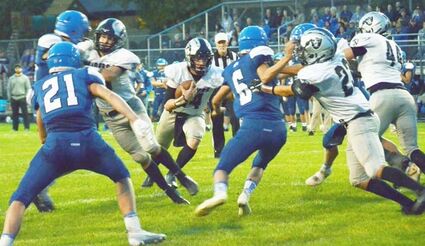 The Lawrence-Nelson football team passed their toughest test of the season with high honors Friday when they downed previously unbeaten and defending current D-2 state champion Kenesaw 46-12 at Kenesaw Friday. Not only did they convincingly trounce their long-time rival, they added insult to injury as they put an end to an 18-game Blue Devil consecutive win streak. The Raiders ran their consecutive game win streak to four games.

The first quarter was a see-saw period with Krayton Kucera completing a 44 yard pass to Tyson Kotinek for a touchdown. Kucera scampered into the end zone for two points to give the Raiders an 8-0 first quarter lead. The Lawrence-Nelson defense stood steady and held Kenesaw to six points in the first two quarters of play.

The Raiders faced no such constraint from Kenesaw in the second quarter. Kucera went to the air to complete a 23 yard touchdown pass to Erik Wheeland. Kucera treated himself to two points with his run. Kucera flicked a five yard pass to Tyson Kotinek for a touchdown. Kucera sauntered into the end zone for two more points. Kucera connected on a one yard pass to Tyson Kotinek for touchdown. Kucera sashayed into the end zone for two points. When half time rolled around the Raiders held a commanding 32-6 lead.

Lawrence-Nelson showed no signs of fatigue as they took the field in the third quarter. The defense held Kenesaw scoreless while the Raiders offense went into idle as they were content to eat up the clock.

Toby Kotineek added six points with 23 yard saunter into the end zone. The extra points attempt was unsuccessful. The Raiders now held a 38-6 lead as the clock ticked away. Kenesaw managed to score a touchdown in a futile attempt to change the inevitable out come. Kucera finished the icing on the cake with a five yard jaunt into the end zone. He added two points with his run. When time expired the Raiders had a decisive win over a long time rival.

The defensive effort was outstanding as the Raiders held the high-powered Blue Devils offense in check for the entire game.

The Raiders travel to Bladen, Friday, to take on the 1-5 Silver Lake Mustangs. Kick off is set for 7 p.m.