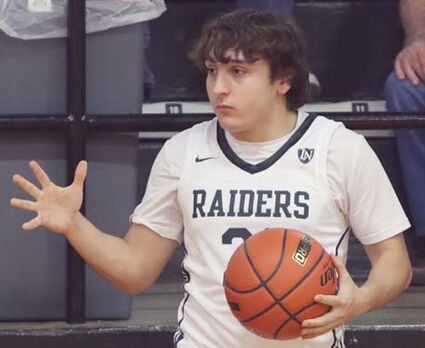 Eric Wheeland looks to set up a play with his Lawrence-Nelson teammates against Friend at Nelson, Friday,

The Lawrence-Nelson Raiders had a mighty struggle against the Friend Bulldogs, Friday, at Nelson. The Bulldogs handed the Raiders a 57-35 loss.

Friend blanked the Raiders in the first quarter to take a 11-0 lead. Matters never improved much for the Raiders as the hole they found themselves in was too deep to escape.

Lawrence-Nelson trailed 27-13 at the midway mark of the game. They were unable to close the gap and ended with a 57-35 loss for a 3-2 record.