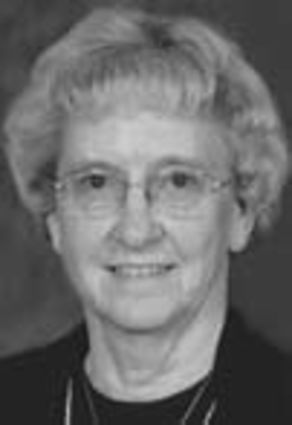 She received her elementary education at the Lone Star Country School in Thayer County. Upon her 8th grade graduation, she attended Byron High School and graduated with the class of 1953.

Following her high school graduation, she attended Fairbury Junior College in the summer months to receive her teaching certificate. During the school year, she taught in several rural country schools.

In August of 1953, she said good-bye to her sweetheart, Arlen Schlueter, as he left for overseas duty in the army. One of her happiest days of her life was on March 17, 1955, when he returned home from England.

She was united in marriage to Arlen Fritz Schlueter on April 1, 1956, by Pastor H.W. Schiller at St. Peter Lutheran Church. This union was blessed with four children Valarie, Monica, Lindley and Shelly.

Adalene served on the church council, taught Sunday School and Vacation Bible School. She was a member of WELCA and held several offices. One of her favorite offices was the Mission in Action Group. She was employed as a checker at Ideal Market in Superior and later became an assistant librarian in the Superior Schools. She was a member of the Brodstone Memorial Hospital Auxiliary and the Hardy American Legion Auxiliary. After her retirement, she enjoyed being a substitute para in the school. Some of her favorite hobbies were sewing, needlework, and making quilts for the grandchildren and for Lutheran World Relief.

She was interested in attending the grandchildren’s various school and athletic activities.

She was preceded in death by her parents, William and Ella; and her brothers, Marvin, Orin and Verdell Freitag; brothers-in-law, Marvin Schlueter and Eric (Rick) Yarnell; and sisters-in-law, Hildreth and Deanna Freitag.

Visitation was held from 4 to 8 p.m. with family present from 4 to 6 to greet friends on Friday.