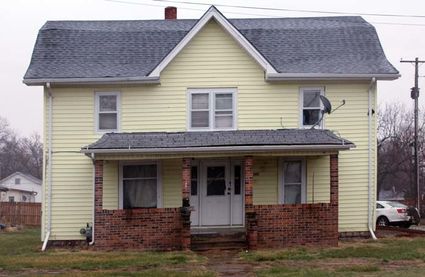 Law enforcement officials from the Nebraska State Patrol, the Nuckolls County Sheriff's office and the Superior Police Department surrounded this house at 222 Collett Street in Superior, Sunday. They arrested Clint Younger, 38, for outstanding warrants from Adams and Hall County as well as a no-bond extradition warrant from Colorado. He is being held at the Adams County jail.

To the unsuspecting, Sunday morning looked like an auction day in East Superior. There were people out in the yards and the streets were clogged with vehicles. But look closer, it wasn't a normal Sunday morning in a rural community.

The vehicles were emblazed with words like "State Trooper" or "Sheriff." And many of the people were wearing vests but the blaze orange vests we associate with the hunter safety.

They were hunters, all right, but their desired prey was not a trophy buck deer. The vehicles belonged to officers associated with the Nuckolls County Sheriff's Department, the Superi...