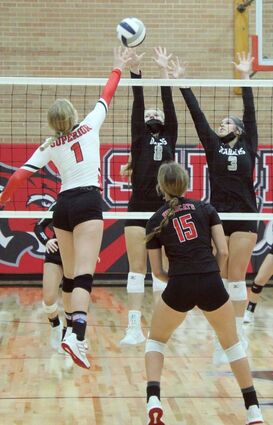 Teegan Duncan (1) send the ball over the net for Superior to waiting Lawrence-Nelson players Emily Troudt (8) and Aleah Heikkinen (3). Atlee Kobza (15) is ready to assist for Superior during the match at Superior Thursday.

It was a successful trip to Geneva for the Superior High School Volleyball team last Tuesday as they swept the Fillmore Central Panthers, 25-15, 25-11 and 25-4, in three sets. The win was the first for Randall Loch as Superior's head coach.

The Wildcats visited Doniphan, Tuesday, for a match with the Doniphan-Trumbull Cardinals. Match results were unavailable at press time.