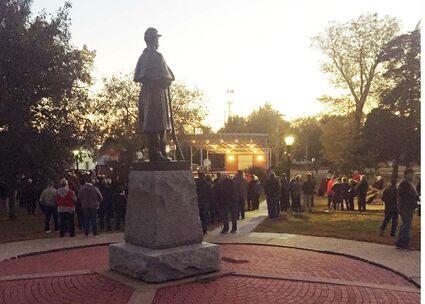 As darkness settled over Superior hundreds of people gathered in City Park before 7 p.m. Sunday to comfort one another and begin the healing process following the shooting death of their friends on Thursday. The candlelight prayer vigil was sponsored by Nuckolls County Ministerial Association. The temperature was moderate, the winds calm and skies clear during the service. Participants prayed, sang and consoled one another.

They were hard to count in the dark but hundreds of people from Superior and the surrounding towns gathered in Superior's City Park Sunday evening to pray for healing as this area struggles to deal with the tragic shooting in the Agrex elevator office that claimed three lives on Thursday afternoon.

For most, the shooting was something they thought only happened in big cities, not something this area would ever have to deal with.

The Nuckolls County Ministerial Association organized the candlelight prayer vigil. Rain clouds which had dumped a freezing drizzle on Superior during the morning...