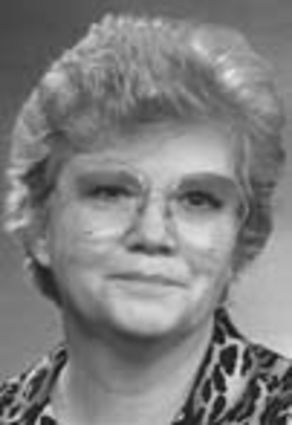 Prior to her marriage, Verona did secretarial work at the Thayer County Courthouse in Hebron. She continued her secretarial duties at Concordia Teacher’s College in Seward, Neb., (1953-1954) and at Faith Lutheran Church in Topeka, Kan. (1954-1955). After the birth of her two children, Kevin and Julie, she cared for them until they started school. She worked food service positions at the Topeka Lutheran School in Topeka and then at Goddard High School in Goddard, Kan., (1971-1989). From 1970-1971, Verona was also the Goddard City Clerk.

Verona was preceded in death by her sisters, Esther Juengel and Wilda Juengel; brothers, Louis, Elmer and Robert Heider; and nieces, Carolyn Filter and Nancy Turek.

Verona’s favorite hymns were “What a Friend We Have in Jesus,” and “I’m But a Stranger Here.” Her cherished Bible verses included Romans 8:28, Jeremiah 29:11 and the 23rd Psalm.

A graveside service was held at 11 a.m. Friday, Feb. 7, 2020, at the St. Paul Lutheran Cemetery near Deshler with Pastor Ethan Feistner officiating.

Internment was in the Saint Paul’s Lutheran Cemetery at Deshler.