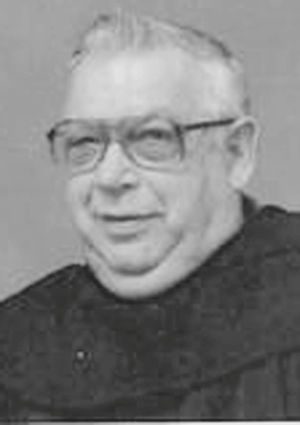  Br. Herbert (Herb) Rempe, O.F.M., a Franciscan friar of the Sacred Heart Province, died on Tuesday, April 14, 2020, at St. Mary's Home at the Felician Village in Manitowoc, Wisconsin, at the age of 84. James Rempe was born on September 18, 1935, in Lawrence, Nebraska, to Norbert Rempe and Beatrice (Pohlmeier) Rempe. He was baptized, the day after he was born, at St. Stephen Church near Lawrence. James was received into the Franciscan community as a novice on June 21, 1957, and given the name Herbert. He professed solemn vows on June 22, 1961.

Following his solemn profession, Br. Herb became part of the "construction crew" for the building of St. Paschal Friary and School for Brothers in Oak Brook, Illinois. In subsequent years as a friar, Br. Herb served in many different capacities: director of maintenance, formation team, provincial treasurer and provincial councilor, director of outreach ministries in Chicago, and lastly the Friar's Legion and guardian at St. Peter's in Chicago. He retired to Manitowoc in December of 2017.

Br. Herb was preceded in death by his father, Norbert Rempe, who died when he was five years old; his mother, Beatrice (Pohlmeier) and her husband, Clarence Jurgensmeier; a brother, Donald Jurgensmeier; and a sister-in-law, Maxine Rempe. He is survived by his Franciscan brothers; one sister, Theresa (James) Schneider, of Lincoln, Nebraska; two brothers: Walter Rempe, of Osceola, Nebraska; and Thomas (Karen) Jurgensmeier, of Hastings, Nebraska; and one sister-in-law: Charlyn Jurgensmeier, Omaha, Nebraska. He is also survived by many nieces and nephews and great-nieces and great nephews.

The friars would like to express their appreciation to Br. Herb's caregivers, those at Blessed Giles, and also to the nurses and staff at St. Mary's Home at the Felician Village.

The friars celebrated a private Mass of Resurrection on Monday, April 20. Following the Mass, Br. Herb was buried in the friars' plot at Calvary Cemetery in Manitowoc, Wisconsin. Family, friars and friends will gather for a Memorial Mass at a later date and place, to be determined.

In your kindness, please consider making a donation in memory of Br. Herb for the continued care of our retired Franciscan brothers and priests. Any donation would be greatly appreciated. Please send your charitable contribution to Blessed Giles Friary, 1820 Grand Avenue, Manitowoc, WI, 54220. May God bless you.