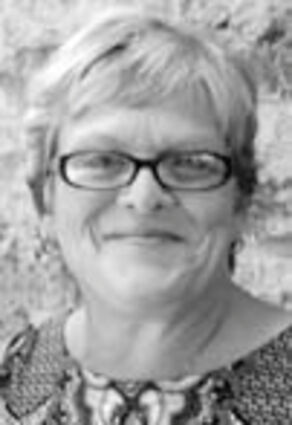 Tina was a 1981 graduate of Concordia High School and attended Cloud County Community College. She was a member of St. Joseph Catholic church in Superior.

She was united in marriage to Myron L.Vishnefske of Belleville, Kan., on April 9, 1983. They were blessed with two daughters: Chrissa and Andrea. Later, they divorced.

Tina was then united in marriage with Darrell L. Fuller on July 16, 1988, at Union Church, Hardy.

Tina operated an in-home daycare and worked at the Do Drop Inn in Hardy. She later cared for multiple elderly members of the Superior community. She loved her friendship with many and no one was a stranger to her. She helped at the local food pantry, church or anywhere help was needed. She loved to give rather than receive. She enjoyed cross stitching, making bracelets to share. Everyone enjoyed her baked goods and cooking.

She loved her crushed ice, camping, garage sales, shopping "especially for purses, jewelry and clothes." Tina enjoyed family trips and taking Darrell daily lunches. Most of all she enjoyed being with family, having her granddaughters over to spoil, hanging out with her dog, Jasper, and having her friend's over for long talks and laughter.

Tina was called to her forever home on Sept. 12, after a long fight of Heart disease at University of Nebraska Medical Center in Omaha, at the age of 59 years, 2 months, 26 days.

She was preceded in death by her parents; her grandparents, Telus Matthew Mathias and Ruth Maxine (Elliott) Muths, Charles Alfred and Velma (Jameson) Garst.

Survivors are her husband, Darrell of Superior; daughters, Chrissa (Richard) Bridgmon of Fairbury, and Andrea (Matt) Hupka of Lincoln, Neb .; two grandchildren: Leah and Ellie Bridgmon; one sister, Kelli Garst of Wichita; along with a host of nieces, nephews, aunts, uncles and friends.

Music selections were "Jealous of the Angels," "Amazing Grace," "Here I Am Lord," "The King of Love My Shepherd Is" and "Immaculate Mary," with Linda Ostdiek as the organist.

Interment was in the Evergreen Cemetery, Superior.

Memorials to the family.